Origin of the Club

The origin of the Waterhouse Club could be said to rest in a South Australian State Cabinet meeting in the mid 1980’s during which spending proposals from North Terrace’s major  institutions were considered.  Initially, the Museum’s proposal was favoured but later government money was not available. Faced with this reality, in 1987, the Museum Board challenged a firm of public relations consultants to devise a plan to increase the Museum’s share of the dwindling government pie.

A New Type of Support Group

The consultants recommended a new type of support group to be called the Waterhouse Club after the Museum’s first Director. Its membership would be drawn from the upper echelons of government, business and society on the premise that with supporters of this calibre, the government would take more notice. To attract membership, the Club needed to offer exceptional experiences, showcasing all that was great in the Museum. Progress was made by early Club Presidents, Ms Judith Barr, Ms Suzanne Ackerman and Ms Judith Quigley who built a wide and influential network.

In 1990, President Judith Quigley shifted the emphasis from money losing black-tie dinners to engaging picnics set among the attractive sandstone buildings behind the Museum. Judith invited Tony Brooks, public relations consultant, to set the future tone of the Club’s events. Tony drove fun and irreverent events, banishing stuffy stereotypes, and famously “teetering on the brink of bad taste”. He organised auctions for sale of the right to name a recently discovered species in perpetuity, now widely copied, then so innovative that London’s ‘The Times’ reported the event.

The expedition concept came in 1992 with Ant Simpson’s return from an African safari organised by Harvard University. Ant had witnessed the power of combining a quality local tour operator with world-renowned scientists with exceptional communication skills. Using this model, an expedition was planned to visit South Australia’s premier outback tourist destination, the Flinders Ranges. Three scientists, Philip Jones from anthropology, Steve Donnellan from biology and Neville Pledge from palaeontology showed expeditioners how to “See the world through the eyes of the SA Museum”. With a sweep of the arm, the palaeontologist described how geological forces shaped the landscape and described the mega fauna; the biologist took over and showed how plants and animals adapted to the changing climate and the anthropologist told the story of how the Aboriginal Australians adapted to and settled the harsh land, followed by the European who also had to adapt.

The Club’s first expedition changed the way its participants looked at the landscape. One surgeon wrote, “Outside my life in surgery, it was the most exciting time in my life”. Expeditions have met the expectations for those attending, including a retired premier, cabinet ministers and leaders in business and the professions.

In 1995, an epoch making event occurred – Tony Brooks’ “The Totally Stuffed Dinner”. The first of a series, it was startling and different; diners were seated in the mammal gallery and, as the lights came up, naked dancers who had been positioned in the glass cases among the animals, peered out at the guests as if they were an alien species. In time the dancers emerged and walked among the guests, observing them intently and silently, to the consternation of many. The observers observed!

The dinner was a run-away success, establishing the Club as the talk of the town and a truly different support group. The Club was written up in the ‘The Australian’  (see below). The Museum’s director, Dr Chris Anderson, said of the Club “We couldn’t live without them; they provide a fantastically sophisticated level of support”.

In 1995, Ant Simpson became President. During his presidency, the Club’s philosophy has been more tightly defined with focus on organising unique and higher priced events that represent the true value of the Museum association. The prices allowed better experiences to be provided, which in turn raised participants’ satisfaction and attracted senior members of the community.

The Club has succeeded beyond its original expectations with a vibrant membership and enthusiastic support from the Museum’s scientists, providing a robust flow of untied cash to the SA Museum Foundation. It remains a unique entity in the world of museum support groups. 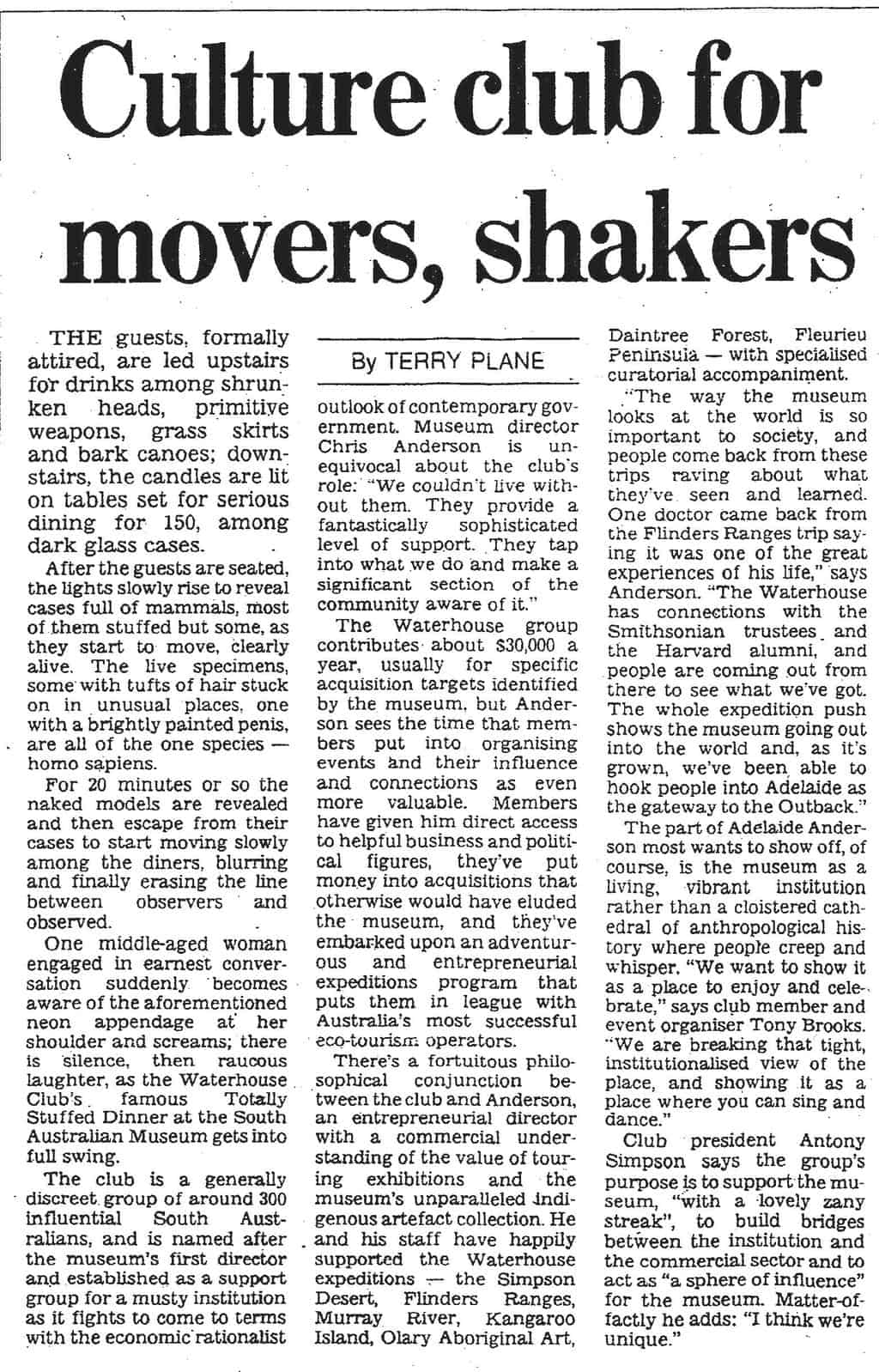